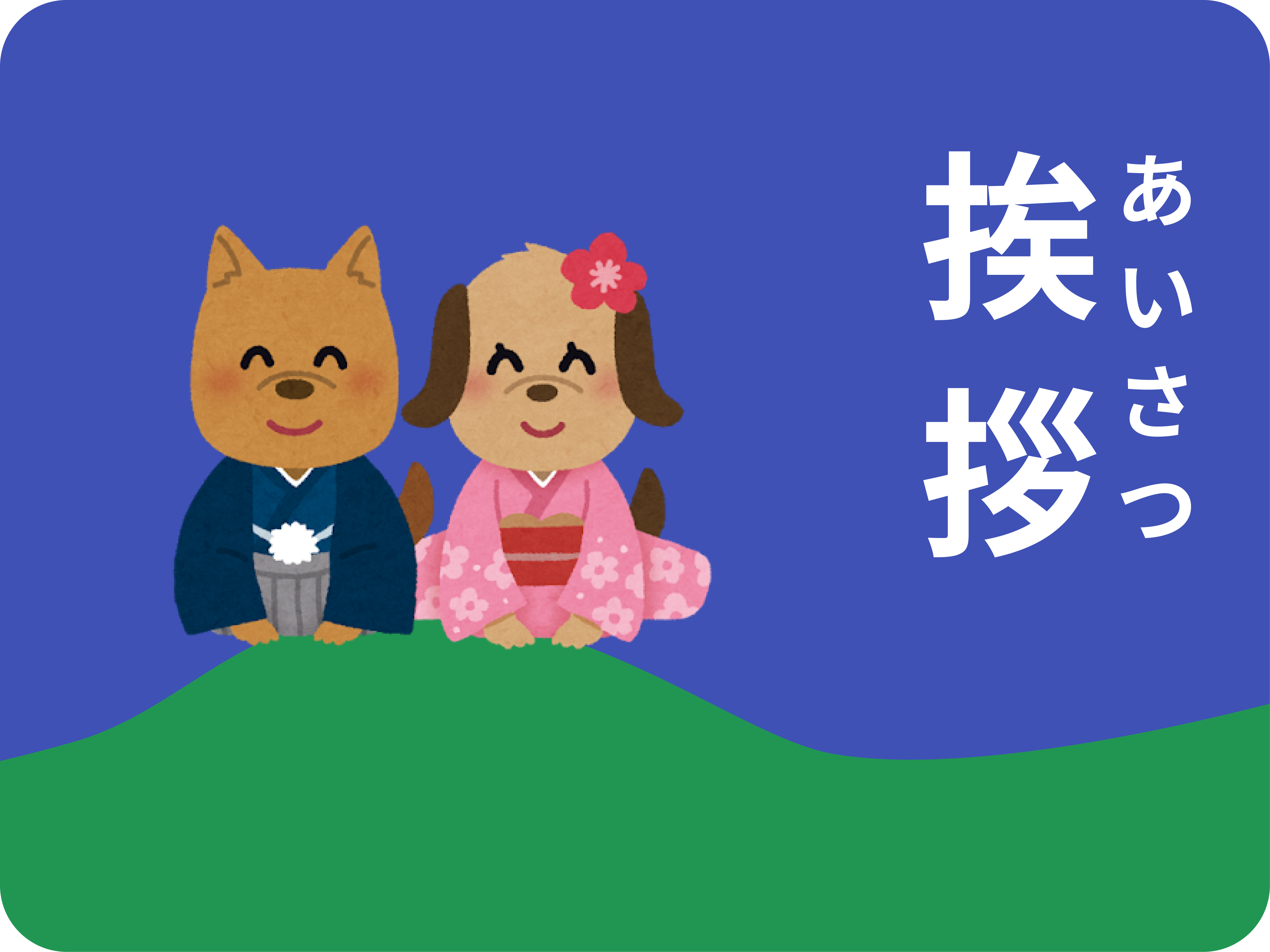 A lack of cultural understanding and empathy can certainly lead to friction or confusion between people from different cultures.

When asking non-Japanese people who have visited Japan about their impression of Japanese people, many of them say that the Japanese are very serious and polite. In some cases even cold or shy. Why are these impressions held by foreign visitors to Japan?

One of the reasons would be Japanese greeting style. Greetings are an important part of every culture in the world and a great tool to connect people. The Japanese word of “greeting" is “Aisatsu” (挨拶) and has the core meaning of “communication” in Japanese language. Both of the letters of “挨拶” (Aisatsu)” which are "挨” (Ai) and "拶” (Satsu) mean "approaching" and express the essence of greeting behavior. However, when you think about it, western greetings such as "how are you?", "I’m good, and “you?", "I’m good too" are not frequently used among Japanese people. Actually, it’s quite unusual unless you haven’t met someone for a long time.

So what are Japanese greetings for and how do they perceive greetings?

In Western societies, greetings are used to reduce the social distance between you and another person or group. For example asking about the other person is or their day. In Japan greetings are more often used to maintain a social distance or social hierarchy. This is not to be rude or cold, but actually the opposite. It is done to ensure no one feels disrespected. There is even a saying "親しき仲にも礼儀あり” (Shitashiki naka nimo reigi ari) which is directly translated as “there must be etiquette even among close relationships” which shows how the Japanese view greetings.

In Western societies, greetings including smiles and fancy words are a way to get closer to others, but in Japan, keeping the degree of connection and trying not to exceed or eliminate a distance from others is more important to maintain balance in relations with people. A saying "親しき仲にも礼儀あり" (Shitashiki naka nimo reigi ari) which is directly translated as “there must be etiquette even among close relationships” shows Japanese greeting culture. Similar to “a hedge between keeps friendship green” and it means that no matter how friendly the term is, it always needs courtesy.

“お早う" (Ohayou) is an informal way to say “good morning” in Japanese. It does not include the word “morning”, but it literally means “early” and was originally a greeting word for rewarding someone who had been working in the early hours of day! It’s typically used until 10-11am.

"お早うございます" (Ohayou gozaimasu) is not only a more polite way to greet someone in the morning, but it’s also commonly used at school or work, even after 10-11am.

After 10-11am, “今日は" (Konnichiha), which literally means “today is” is used to mean “good afternoon” or “hello” during the day. In the past, it was common to greet others with phrases like “今日は良い天気ですね" (Konnichi ha ii tenki desu ne) which means “it’s nice weather today isn’t it?”, or ”今日はご機嫌如何ですか？"  (Konnichi ha gokigen ikaga desu ka?) which means “how are you today?”. However, these days only the first word “Konnichi ha” is remaining and has became the word for "hello" or “good afternoon”.

"おす" (Osu) is a kind of the greetings often used by people involved in martial arts such as karate, kendo, and judo. It was originally "お早うございます" (good morning) and shortened to "おす" (Osu). Then, it’s said that as a result of guessing the kanji of "おす" (Osu), it may have become the current form "押忍" (Osu) as a kind of greeting like hello but which actually means to suppress and endure the ego.

“今晩は” (Konbanha) which literally means “this evening is” is used as ”good evening". It’s an abbreviation for phrases like "今晩は良い晩ですね” (Konban ha ii ban desu ne) which means “tonight is a good night”.

“お休みなさい” (Oyasuminasai) literally means "take a rest". Since "Oyasumi" is followed by the imperative "nasai", it may seem a little strange for people who are going to sleep to say it as "good night". However, this word was meant to be derived from the word “ゆっくりとお休みになってください” (Yukkuri to oyasumi ni natte kudasai) which means “please relax and take a rest” from the innkeeper to his or her guests. It was gradually abbreviated over time.

"さようなら” (Sayounara) stems from "然様なら/左様なら” (if It’s so) which is an abbreviation for something like "然様ならば/左様ならば私はこれで失礼いたします” (Sayounara ba watashi ha kore de shitsurei itashimasu)” which roughly means “if it’s so, I'm leaving". In the past, it was more common to say “ご機嫌よう” (Gokigenyou) which means “farewell” with “Sayounara” but people started to drop the former and just say “Sayounara”. “Gokigenyou” did continue to be used by women after that, but is not very  common nowadays.

“Yaa" (やあ) and “Yotsu" (よっ) are pretty casual ways to say “hi” or “hey there” to your close friends. “Yahhoo" (ヤッホー) is the equivalent of yoo-hoo in English but is often used as hi among young people. “おーい" (Ooi) is is an interjection typically used by men to call for someone with the same status or their junior. In the past, people would respond to greetings with “おーい” (Ooi) as well or when in agreement with you.

"どうも” (Doumo) is a still a relatively casual way of saying “hi” or “hey”, but is more formal than the greetings above. It literally means very or very much and it comes from the phrase "どうも言えぬ” (Doumo ienu - I can't say anything) in the Edo period and was used when you saw beautiful scenery or were moved by something hard to express in words. In the Meiji era, "Doumo ienu" was abbreviated to just "Doumo", and it became a word that emphasizes the word that follows it, such as very and very much. Gradually, "Doumo" started to be part of greetings such as "どうも先日はお世話になりました” (Doumo senjitsu ha osewa ni narimashita - Thank you for your help the other day), and nowadays the shortened version "Doumo'' itself has become a kind of greeting.

“毎度” (Maido - every time) is a specific greeting word that salesmen, businessmen, or business people use when visiting their clients in the Kansai region. It’s a word originally established by omitting "毎度ありがとうございます” (Maido arigatou gozaimasu - thank you every time) or "毎度お世話になっております" (Maido osewa ni natte orimasu - thank you for your help every time).

When you’re leaving your house for the whole day for work or school, you’re supposed to say “行ってきます" (itte kimasu) which means, “I’m leaving” and If you’re still home.

10. When someone is leaving

When someone else is leaving, you can respond to “itte kimasu” with “行ってらっしゃい” (itterashai), which is similar to “itte kimasu” but the actual meaning is more like , “take care and come back soon”.

“宜しくお願いします” (Yoroshiku onegaishimasu) is a common Japanese aisatsu that conveys that the speaker wishes to have a good relationship with the people to whom she or he is speaking. It is often used as a final line at the end of a speech, or when parting ways with customers or co-workers.

“いらっしゃいませ” (irasshaimase - Please come) is often used to welcome the customer from the clerk. Originally, it was not only used as an expression to encourage customers to enter but also was used as the greeting expression for customers who were already in the store.

Meanwhile ”ようこそ” (Youkoso - welcome) is usually used to express gratitude to visitors and to welcome them to public places or large areas such as a country or a region.

When you return home, it’s common to say "只今” (Tadaima) which literally means “right now”. The reason why people who come back say "Tadaima'' is that this is an abbreviation for the phrase "只今帰りました” (Tadaima kaerimashita - I'm home now). By shortening the phrase, ironically the important part of the greeting "Kaerimashita" has been dropped.

14. When someone comes back home

The response for “Tadaima” is to say "お帰り” (Okaeri - Welcome back). As well as “Tadaima”, "Okaeri" is a shortened version of "お帰りなさい” (Okaerinasai) which is politer form of “Okaeri”.

15. Before starting to eat

“頂きます” (itadakimasu) is said when you start your meal. The general meaning of “itadakimasu” is "Bon Appétit", but its nuances express gratitude to the Gods for providing food. It literally means “I’m receiving” and it was derived from "頂き” (itadaki - On the head) because one would raise the bowl above their put on the head, when receiving the food received from the Gods or when receiving an item from people with higher status. It has since become a word used as a humble way to say  “receive”, "eat" and “drink”.

“御馳走様” (Gochisousama) or the politer version “御馳走様です” (Gochisousama desu) is said when finishing your meal and is also another phrase for thanking the Gods for the food. In the past, there were no refrigerators or supermarkets like we have now, so it was challenging to prepare for food. "馳走” (Chisou) means to run around, and it represents the state of struggle when getting ingredients and serving a meal.

Furthermore, to show gratitude to those who prepared the meal, the most formal honorific title "様” (sama) was added after “Gochisou”, and became "Gochisousama" and its politer version “御馳走様でした” (Gochisousama deshita) - common sayings after a meal.

”久し振り” (Hisashiburi) and its politer version ”お久し振りです” (Ohisashiburi desu) are the phrases to use when contacting or meeting a person you have not met for a while. The direct translation is “After a long time” but it’s similar to the expression "long time no see" in English. While “Ohisashiburi desu” is usually used towards those who are younger or the same age as you but are the same status or your junior, its synonym “ご無沙汰しています” (Gobusata shiteimasu) is  is more humble and respectful phrase, thus it’s usually used for someone older or superior.

“お疲れ様" (Otsukare sama) and the politer version “お疲れ様です" (Otsukare sama desu) is a phrase used to recognise someone’s hard work, just like “good job” in English. It’s also used as a farewell when leaving work. You can also use “Otsukare sama” to say “hi” when you’re bumping into someone at work to emphasise that you’re going back home like “see you” or “bye”.

"ご苦労様" (Gokurousama) is also a phrase for thanking someone’s hard work, but is used by someone older or superior to someone younger or their junior.

19. Apologising for interrupting someone

“お邪魔します” (Ojama shimasu - I'll bother you) is another one of those Japanese words without direct translation in English, and is used as an apology for interrupting someone when entering someone’s home or personal space. In Japan, when you’re about to enter someone’s house, it’s common to say "Ojama shimasu". It’s a form of politeness to express an apology to the person inviting you into their home or who has made time for you. Even if you’re friends, it would be rude not to say it!

20. Calling someone on the phone

The meaning of "もしもし” (Moshi moshi) is literally “hello”, but used exclusively on the phone. Before the Meiji period, "申し" (Moushi - declaration) was a common phrase. It became "申し申し” (Moushi moushi) when telephones became more  widespread, but since it was difficult to make out what people were saying down the phone, telephone operators often had to say "Moushi” twice “申します” (Moushimasu - I’d like to declare) to ensure that they were being heard and understood. Over time this became the phone greeting we know today as "Moshi moshi".