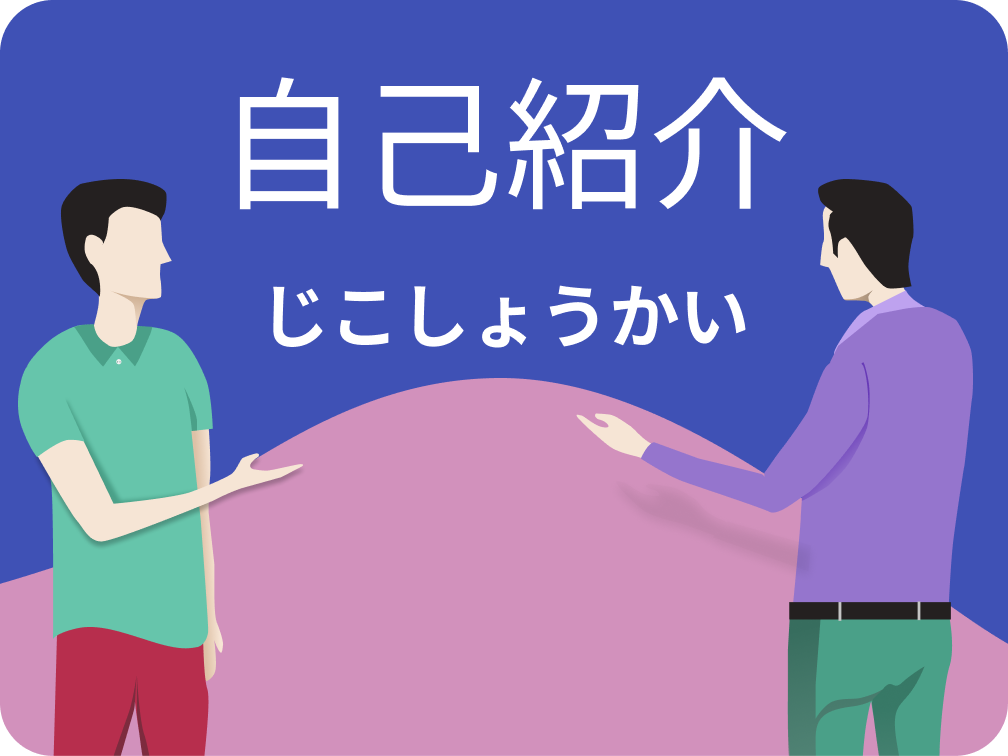 In all walks of life, whether you're a student or in business, you'll meet new people and you'll need to introduce yourself. In this blog, we'll be looking at ‘jikoshoukai’, which means ‘self-introduction’ in Japanese.

In Japanese, the proper way to greet someone you’re meeting for the first time is to say ‘hajimemashite’. It's directly translated as ‘this is the first time’ but its closest English equivalent is ‘nice to meet you’ or ‘how do you do?’

Whatever the language, the next thing you'll say is your name. In many languages, such as English, you need to specify the subject of the sentence, which in a self-introduction is ‘I’. However, in Japanese this isn't necessary and the subject can be dropped in most cases when the subject is obvious.

To say your name in Japanese, you therefore start with your name and end the sentence with ‘desu’. To put it simply, ‘desu’ in this instance means ‘am', but we'll go over what ‘desu’ means in greater detail in a later blog post.

Unlike English, where there isn't a strict rule applied to countries to get their respective nationalities (e.g. ‘Spanish’, ‘Dutch’, ‘Korean’, ‘Chinese’), Japanese has a standard and uniform way to express nationality: simply add the word ‘jin’ (meaning ‘people’ in Japanese) to the end of the country. To say you are from that country, add ‘desu’ after it to complete the sentence.

You'll have hopefully noticed in the section on saying your name that word order in Japanese is very different to English. Both name and hometown are nouns and are used at the beginning of sentences when the subject is dropped (which is very often, as we’ve discussed before).

Saying your age in Japanese is very easy. After saying the number, simply add ‘sai’ (meaning ‘years old’) to the end of it and close the sentence with, you guessed it, ‘desu’. Interestingly, there is one exception to be aware of. If you're twenty years old and reading this blog, the much more common way to say your age is ‘hatachi’ instead of 'Nijussai' in Japanese.

In most cases, Japanese will have its own way of saying traditional occupations, such as ‘isha’ (‘doctor’) and ‘bengoshi’ (‘lawyer’). For more modern occupations, it is completely regular and proper to say the English word which has been adapted to sound more Japanese (it’s worth noting that the use of English in Japanese extends far beyond just occupations).

These ‘Japanified’ English terms (‘wasei eigo’ in Japanese) use the syllabary katakana, which we'll discuss further in a later blog post.

To explain how to say what you're studying in Japanese, it's first necessary to introduce particles. To put it briefly (don’t worry, we’ll discuss this more in later articles), you can think of particles as similar to English prepositions, but since they come after the target word they are more like postpositions.

To say ‘I'm studying Japanese’ in Japanese, start with the object (‘nihongo’ which means ‘Japanese’) followed by ‘wo’ and finish by saying ‘benkyou shiteimasu’. In this sentence, the ‘wo’ is the particle, and precedes the action verb ‘benkyoushiteimasu’ which means ‘doing study’, or, more simply put, ‘studying’ (‘benkyou’ meaning ‘study’ and ‘shiteimasu’ meaning ‘to do’).

Now that you've provided all the information about yourself, it's now time to close out your self-introduction. In most languages it's probably sufficient simply to say ‘Thank you’ at the end of your introduction. However, in Japanese, there's a very special saying that is peculiar to the language: ‘yoroshiku onegai shimasu’.

The phrase carries a myriad of different meanings depending on the context and comes in various forms, and is frequently considered by many as an untranslatable phrase, at least in the sense that there's no perfect English equivalent approaching the sentiment of the original Japanese phrase.

In the context of self-introduction, you can take this phrase to mean ‘please take care of me’ or ‘please treat me well’, but remember this phrase can take on entirely different meanings when placed in different contexts, such as closing out an email where its meaning is closer to ‘kind regards’.