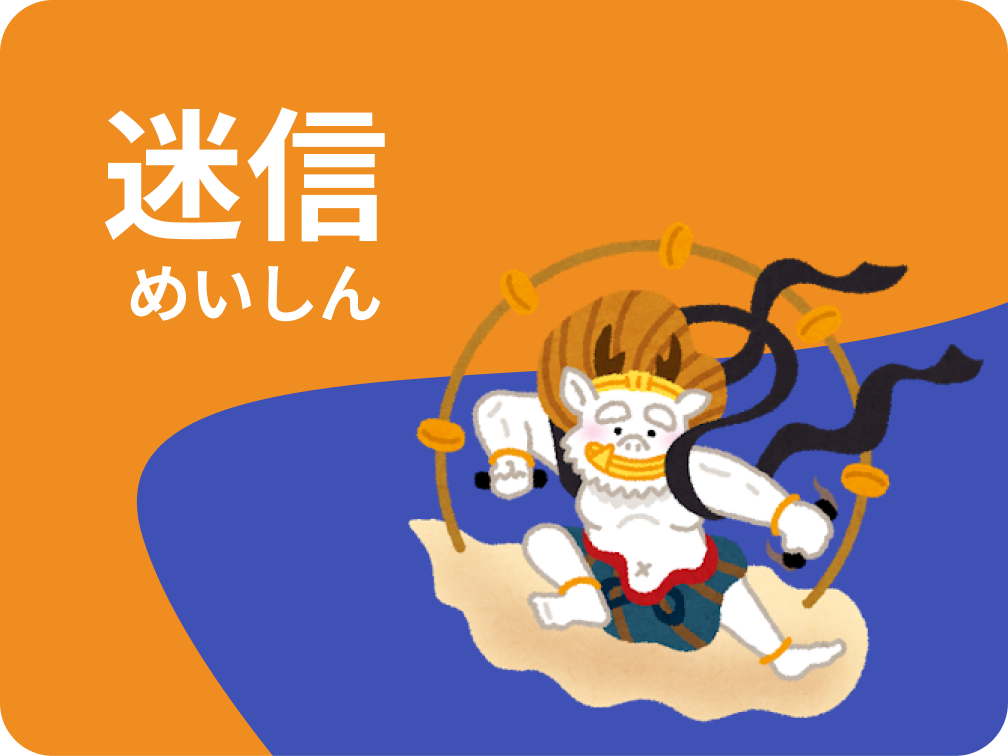 This week, we’ll be covering the 11 bad luck superstitions in Japan. Don’t miss the blog about 11 lucky ones!

These numbers are what is known as Imikazu (unlucky numbers) and it’s best to avoid using them as much as possible. Each are homonyms with negative words: 四(shi ), the number 4, shares its pronunciation with 死(shi), ‘death’. Couple 四(shi), with 二 (ni) and you have 42 which perfectly echoes 死に(shini), ‘to death’. You pronounce 九(ku), meaning 9, just as you would 苦 which means ‘to suffer’. The characters 4 and 9 together are particularly unlucky as they could, as standalone characters, be pronounced shi ku, bringing the characters 死 and 苦 to mind. The combination of the two, i.e forty-nine, can be pronounced shijuuku (and not always yonjuukyuu, as you may have already learned), echoing 始終苦, meaning ‘a struggle from beginning to end’.

A long time ago, the common tongue amongst thieves, hoodlums, vagabonds and burglars roaming the streets of Edo was whistling, so if you whistled out in the open yourself, you might find yourself with an unwelcome visitor. Anyone who wasn’t a shady character would often refer to these sorts as "snakes", and so the superstition that whistling invites snakes out into the open was born.

Nails sharp as daggers? Leave them as they are until sunlight if you want to outlive your parents.

This is another case of a term possessing a dark and foreboding homonym. The phrase for “cutting your nails at night” is pronounced yozume  (夜爪) which is also how you would pronounce the truncated and old-fashioned phrase for “shortening your own life” (世詰, derived from 世を詰める (yo wo tsumeru)). Also, before the miraculous invention of nail clippers, using knives to cut your nails was pretty standard. Doing so at night though would have been understandably ill-advised!

Wait, is that a hearse? Quick! Hide your thumbs!

The word for ‘thumb’ in Japanese, 親指 (oyayubi) literally translates as ‘parent finger’. Since it’s believed that the spirits of the dead loiter around the hearse carrying their bodies, the Japanese are quick to hide their thumbs at the sight of a hearse, as there is an old superstition that these spirits will enter their thumbs, leading to their parents’ death.

If you hear lightning outside, hide your belly button.

An old tale tells of 雷神 (raijin), the god of thunder and lightning, gobbling up children’s exposed belly buttons in a storm. The only way to stop him is to make sure your bellybutton is well covered before the lightning crashes and the thunder claps, or so the story goes for parents hoping to prevent their children catching colds by leaving their midriffs bare.

It’s winter, it’s cold, I know. But for goodness sake, take off your socks before you go to sleep!

Not only are the scientists telling you to keep your feet bare when you sleep to ensure healthy blood circulation and a well regulated body, but believers of an old Japanese superstition are imploring you to heed the same advice. They will tell you not to wear socks in bed as it’s reminiscent of the socks worn by the dead before they are cremated. The superstition dictates that you are tempting fate by putting your slipper socks on when you kip. Off with ‘em!

Remember last week we told you that a visit from a spider during the day was a good luck omen? Well, if you get a visit from one of these arachnid critters at night, scratch what we said. A night-time encounter with a spider is seen as bad luck as it’s an unpleasant reminder of another unwanted visitor that shows up at night, a burglar.

If you lie down right after eating, you’ll become a cow.

This amusing superstition is used by parents to warn their children of the negative effects lying down has on digestion. Its origins are less exciting, however, as it probably just comes from the fact that cows, as you might have noticed on trips to the countryside, often find themselves horizontal after a good chow-down on some farmyard grass.

Don’t pass your food from your chopsticks to someone else’s and don’t stick your chopsticks upright in your bowl of rice, unless you want to horrify your Japanese dinner party.

These are perhaps the most well-known and important forms of Japanese table etiquette to be aware of. It’s not just seen as terrible manners, but it’s also thought that you’d be inviting a great deal of bad luck into your life. Expect a frosty reaction from your Japanese dinner party if you attempt to share food from your chopsticks to theirs, as it would remind them of the solemn custom in Japanese funerals when the bones of a cremated loved-one are picked out of the ashes by relatives before being placed into an urn, known as 箸渡し(hashiwatashi).

突き立て箸(Tsukitatebashi), is the term given to the act of sticking your chopsticks upright in a bowl of rice, which is what is offered to the dead at a funeral, known as 枕飯(makurameshi).

Don’t dry your laundry at night.

In old Japan, it was common to dry the kimono of the deceased at night. These days, many people still hold onto the belief that you invite death by drying your clothes at night.

Try to avoid breaking your mirror.

As in many Western cultures, breaking a mirror is seen as bad luck. In Japan, the mirror is said to be a reflection of the soul, so breaking it is like breaking a part of your soul. Interestingly, this superstition is extended to include breaking the teeth of combs as well.